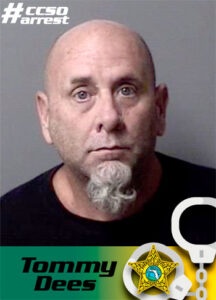 A Dunnellon man, who is a registered sex offender, has been arrested and charged with sexually assaulting a 4-year-old boy.

On Oct. 9, the Citrus County Sheriff’s Office (CCSO) was contacted in reference to an alleged sexual assault of a juvenile victim.

The complainant told responding deputies the 4-year-old had disclosed that the suspect, 52-year-old Tommy Glenn Dees, had performed sexual acts on the child.

Detective Ricci with the CCSO Special Victim’s Unit (SVU) was assigned to conduct an investigation.  On October 12th the victim was taken to the Citrus County Children’s Advocacy Center, Jessie’s Place, where members of the Child Protection Team conducted an interview.

The victim confirmed during the interview that Dees had performed sexual acts while the victim was at Dees’ residence in Dunnellon.

On Oct. 15, Detective Ricci and Detective Arnold responded to Dees’ home to interview him in about, allegations made by the victim. While speaking with detectives, Dees’ confirmed the victim’s statements and provided details of the incident that occurred while the victim was in his care.

“Mr. Dees took advantage of not only the victim in this case, but also the victim’s family who placed their trust in him.  This child showed great courage in speaking up about what happened” said Citrus County Sheriff Mike Prendergast.

,”Incidents like this shock all of us to our very core and highlight the need for specialized units to respond and be advocates for our young victims.  The detectives of the Special Victim’s Unit and the members of the Child Protection Team will continue to work together as a team to protect those that cannot protect themselves.”

Over the course of the investigation, detectives quickly learned that Dees is a registered Sexual Offender with child pornography convictions stemming from a 2016 investigation.