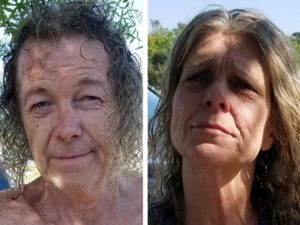 The Citrus County Sheriff’s Office on Thursday served a search warrant on a Beverly Hills home following neighbor complaints of suspected drug activity going on at that home.

Detectives with the Tactical Impact Unit obtained the search warrant after learning the occupants of the home were involved in illegal drug activity.

“We received numerous tips of drug activity occurring at this home. Our detectives and deputies’ hard work and dedication in making sure those tips were fully investigated, resulted in a search warrant being obtained,” said Sheriff Mike Prendergast.

Complaints from community members and patrol deputies working in the area helped detectives obtain the search warrant for the home. During the execution of the search warrant, detectives located crack cocaine and several items of drug paraphernalia inside the closet of the master bedroom.

After speaking with both occupants, 57-year-old homeowner Donald Marshall and 60-year-old Donna Perry were arrested for possession of cocaine and possession of paraphernalia. Their bonds were set at $3,000 each.

While still on scene, multiple members from the community proceeded to thank detectives and deputies for addressing this neighborhood nuisance, the Sheriff’s Office said.